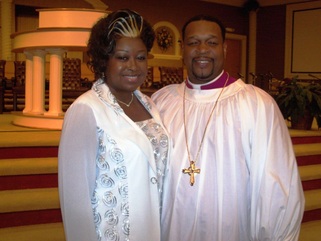 Known to many as a man of impeccable character and integrity in the things of God, Bishop Charles Young is the Founder and Senior Pastor of Deliverance Tabernacle Christian Center.

Early in his assignment as a shepherd in the Kingdom of God he adopted the adage “if you build the people of God, they will build the Kingdom of God.” This epiphany was divinely inspired by the Holy Spirit and is reflected in the body of members and leaders who are passionate about Kingdom work under his leadership.

His ministry has been characterized as reaching the whole man- body, soul and spirit, which has been a focal point in the 10 years he has been a pastor.

Because Bishop Young is a visionary with a strong entrepreneurial spirit, he has led Deliverance Tabernacle in facilitating outreach ministries that encompass many facets of spiritual development in a kingdom manner.

He is also a man of great faith and obedience. While he was the assistant pastor at Pentecostal Temple C.O.G.I.C., under the leadership of his father and Prelate of the Northwest Florida Jurisdiction, God spoke to Pastor Young that it was time for him to build a ministry.

Because he is a man of God that believes all things must be done decently and in order, he sought the blessing of his father for release, and the rest is history.

Bishop Young’s affection for lost souls, especially young adults who struggle to find their way, led him to first establish a Christian Club for young adults in December of 1997.

He had no idea that 16 of those young people would attend the first service on January 1, 1998 and become the foundation of leaders for Deliverance Tabernacle Christian Center. Those 16 members have now grown to over 600 members.

Bishop Charles Young has now become a “Pastor of Pastors", mentoring many other shepherds. Pastors all across the nation now consult him due to the tremendous growth, construction and principles that are reflected in his ministry.

Bishop Charles Young has established a ministerial alliance program that has produced several pastors, allowing duplication of his spirit of excellence for the benefit of the Kingdom!